They hate following the rules!

Or, rather, they prefer not to because the pleasure and pain for disobeying is their punishment/reward? If you are ‘interested’ *wink* *wink* in just knowing, or you want to try this kink and go all in with your partner-

As my girl, Megan Thee Stallion would say-

Now, we would all want to get into the sexy… I mean…*clears throat*…the educational part of the excerpt quickly just before learning some literary meaning of the brat kink concept.

Brat comes from the literal meaning of being bratty. So, what is the first thing that comes to your mind when the term ‘brat’ comes to your mind? Someone disobeying and deliberately breaking the rule for attention or because they can.

Some of the sexual activities we will be elaborating on later.

It depends on you and your partner (depending on the dom and sub in the picture). Whatever the two of you are comfortable with is allowed (with zero judgment!).

We will be giving you some scenarios from two points of view.

– As a Submissive brat.

– As a Dominating punisher.

Before you try this brat kink sexual activity, remember that it is a more risky sexual game. Do it with someone you absolutely trust, and exchange the rules beforehand. If it is simply a sub, and dom relationship, signing a contract with your brat tamer is a good idea.

Ways To Be Bratty

Here are some of the common ways brat kink triggers their masters to get that good whipping.

The easiest way of disobedience is talking back to your dominating master. There are some scenarios in which you can talk back-

– During sexual intercourse, when your brat tamer asks you to do something, you can deny it with a tone of bratty argument.

– Even normal conversations can turn spicy with a little talking back. Try to defy every statement of your dom partner.

Some ‘brats’ have even gone to the level of calling it, ‘funishment.’ Yes, the submissive does enjoy every part of the act, and if they don’t, there are consents and safe words.

Disobeying orders is probably the best way to get your dominant partner all riled up to give you that goooooood pain!

What could be better than talking back? Disobeying every command of your ‘master.’

Here are some of the common ways you can book that painful pleasure for the night.

– When you try some bondage, physically restrict the restraint of your brat tamer.

– Interrupt your dom partner when they are giving you an order.

– Make a mess around the room.

– Hide the toys or tools your dom uses on you.

– A temper tantrum goes a long way! Learn some of the commonly asked questions about the brat kink answered by experts themselves.

– Make a mess while following their orders.

– Follow their orders, but not the way they want you to.

– Pretend you do not understand what they want you to do.

– Ask them what will happen if you do not obey.

– Show boredom towards obeying them.

4. Embarrassing Them In Public

Now, if you are feeling a little too risque and you are not scared of the punishment coming your way. We are talking about handcuffs, leashes, spanking, orgasm denial… and everything in between…then try these brat kinks and very dangerous behavior.

– Tell them that their punishment doesn’t hurt.

– Just laugh!…if you are into it, you will be crying and moaning soon.

If you are the dom master/mistress (aka brat tamer) disciplining the sub!

Here are some of the ways you can up the ‘funishment’ game. Thus, making it fun from your side as well because you do not like being disobeyed.

– During sexual acts, you can deny them orgasm until they are at their absolute edge.

– Chains and restraints can add a nice touch to restrict their movements.

– Whips and spanks to add the pain factor. You can make them count the spanks for the number of bad behaviors throughout the day.

– Putting them under gag restrictions to prevent them from speaking.

Just remember not every punishment has to be sexual. Some could just be fun and games, while sex could be the cherry on top at the end of the day. 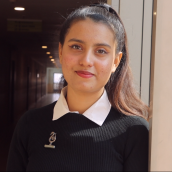 Deepanwita has always considered writing as the ultimate weapon to share every thought an individual ambles through. For her writing is not just an activity it’s a motivation for the scarred mind. She loves writing in genres like fashion, lifestyle, literature etc.

Exploring Daddy Dom Relationships: A Fun Ride On The Older Side!

Mastering The Art Of Orgasm: How To Finger A Girl?